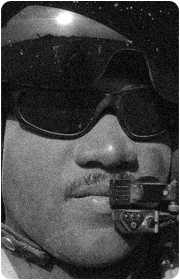 I grew up in a Christian family and was taught Christian values at a very young age. Although Jesus Christ had always been the center of my family, I somehow managed to turn my back against Him, conforming to the pleasures of this world and experimenting with drugs at a young age.

My rebellious nature and my search for happiness led me to the wrong places and the wrong people. In school I would always involve myself in mischief. I found satisfaction in disregarding rules and regulations when I was little, which eventually led to disregarding the law when I was bigger. I always wanted to belong to the coolest, "baddest", and most "siga" group in school. That’s probably why experimenting with drugs came so easily for me.

When most of the students in high school didn’t yet know what drugs looked like, I would go to school high on drugs. I began losing interest in my education and started failing all my subjects until I was expelled.

The only reason I enrolled in College was for the allowance so I could buy drugs. Drugs became the only thing on my mind. I couldn’t start my day without it. My disposition towards everyone around me dramatically changed for the worst. My temper got shorter and shorter. I was like a walking time bomb – the smallest provocation would set me off.

Once I beat up a guy during a traffic jam at night. I hadn’t slept for days and I was so wasted. His bright lights on my rear so irritated me that I pulled him out of his car and began beating him up. I beat him up so viciously and left him lying on the ground, unconscious.. As if that wasn’t enough, I proceeded to smash his headlights.

A month later I beat up another guy at a bar and permanently severed his right eye just because I didn’t like the manner in which he was talking to me. The guy pressed charges against me and I was convicted of physical injury.

Even my family experienced my violent behavior. Finally they got tired of seeing me destroy myself, so my father suggested that I go for rehab. I immediately refused because my impression of rehab then was that it was only for the weak, those who couldn’t handle themselves. I told them that I would just start a new, clean life in the States. In truth I was in denial and was dead scared to face the fact that I indeed had a serious drug problem.

So in September 2001, I left for the States. Everything went well the first couple of years. I had a decent paying job and went sober for the first time in years. One night a friend invited me to a house party where a guy offered me to take a hit and without hesitation, I accepted.

The guy turned out to be a drug dealer so we immediately became friends. I suddenly found myself worse off than when I was in Manila – because I was earning my own money and, more importantly, there were no parents breathing down my neck about my drug use. I got fired from one job to another because of all the inconsistencies and trouble I was causing at work. Trouble was the only consistent thing in my life with drugs. Twice I was arrested for drug deals gone bad. Both times I was set up and had to be taken away in handcuffs, with several guns pointed at me. At another time I was arrested for hosting one of the biggest underground and illegal dogfighting event in our farm. Several dozen armed members of the Regional Special Operations Group raided our farm and arrested about a hundred participants, including myself.

In all my arrests, the only thing that saved me from doing serious jail time was my family’s influence. I was so embarrassed about my actions which caused so much trouble to my family. I decided that it was time to straighten out my act and kick my drug habit. I needed discipline in my life. So I signed up and joined the US Navy. For the first year and a half, the strict and rigorous physical training took my mind out of drugs and out of trouble. I thought I had it all figured out.

But when our battalion got back to the States from a 6-month long deployment in the Middle East, my navy buddies and I decided to have some R and R at a club in downtown LA. I ran into an old friend with whom I used to party and do a lot of drugs with in Manila. He was dealing drugs in the area. When he asked me if I wanted a hit of the drug, I thought to myself, I deserve to have some fun after deployment. So I said "OK".

It totally slipped my mind that the military had random drug tests. Probably by some sort of divine intervention, my name was chosen by the system out of the thousands of military men to be tested. Expectedly, I tested positive for methamphetamine and was automatically given a dishonorable discharge from the service.

I was devastated. It was next to impossible for someone with a record of dishonorable discharge to find a job in the US. I was so depressed that I totally lost all sense of hope. So I went back to the thing I knew best: taking drugs. This time harder than ever before. This went on for several more years. All I wanted to do was to do drugs for the rest of my life. I had hit rock bottom several times. And each time I would always think of asking help from the God I once knew when I was growing up. But each time the devil was quick to deceive me by saying; "Your God would never listen to someone like you. You are way too much of a sinner! He only listens to righteous people." Then all I could do was cry my depression away. I would take a handful of sleeping pills to ease my pain, then start the vicious cycle all over again the next day. But there was also always this small thought inside me that said: I know one day Christ will take me out of this life of sin…one day. That fateful day finally came last May 2011 when I was home in Manila to spend the summer. My father told me that I was going straight to rehab. Initially I resisted. I was concerned about what people were going to say and think about me if they found out. However, my desire for a change was much stronger. And when my father told me that I was going to Penuel Home – a Christ-centered and Bible-based facility – that made it so much easier for me to agree.

The following day on the way to Penuel Home in the car, I felt an unexplainable peace inside me. I knew right then that I was in for a life-changing experience.

True enough the Lord didn’t waste any time. First he opened my mind and made me see what drugs had done to me. Up until that point I never really bothered to assess the damage drugs had caused me. It became apparent to me that the temporary pleasure I got from drugs wasn’t worth the grave consequences that came with it.

All the dreams, relationships, opportunities, money and time wasted. All the problems and troubles I’ve had. All these made me turn against drugs. I started having hatred in my heart for it. The mere thought of drugs felt disgusting.

In Penuel Home I made the most important decision to let go of everything I was holding on to and just surrender everything to the Lord. I stepped aside and let him sit on the driver’s seat of my life, obeying and following his Word.

I began experiencing an over abundance of joy and peace in my heart. Joy and peace that only comes from having a personal relationship with Christ. Joy and peace from knowing that I have been forgiven for all my sins. Everything good just started falling into place. The Lord didn’t waste any time in using my life either. While I was still in Penuel He gave me the task of sharing my life with the inmates in Rizal Provincial Jail and with some out of school youth in an event in CCF that was sponsored by the Department of Education. I was also given the opportunity to help out with less fortunate children in Angono through the Orange Project.

The Lord’s mighty hand has broken the chains of drug addiction that had bound me for more than half of my life. Christ’s love has finally freed me from my addiction. Because of this I’ve dedicated the rest of my life to serving him. I am at His disposal and will continue to testify to the Good News Of His Grace.

I used to be a former drug dependent but now totally dependent on our Lord Jesus Christ.